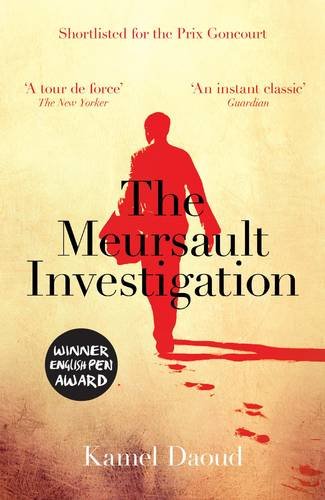 Review
‘The Meursault Investigation is perhaps the most important novel to emerge out of the Middle East in recent memory…searing.’ Financial Times

‘An indispensable companion to Camus...superlative writing, beautifully translated...brilliantly metaphorical. For its incandescence, its precision of phrase and description, and its cross-cultural significance, The Meursault Investigation is an instant classic.’ Guardian

‘An impressive, provocative undertaking...that might not prove easy to put down...the polemic is balanced by artistic ingenuity...A relentlessly adroit blend of fire and clinical precision ensures that Kamel Daoud's iconoclastic deliberation is about far more than a renowned novel by Albert Camus.’ Irish Times

‘Kamel Daoud’s brilliant novel in response to Camus has made this Algerian a global literary star. It’s also earned him a fatwa...The Meursault Investigation redeems Camus’s victim by naming him, giving him an identity. But its more profound achievement is to raise the question: what is this identity? The answer lies with God and philosophy.’ Sunday Times

‘Daoud’s text is not…a corrective to Camus’s, but rather a continuation, designed to show that the issues it raises remain acute and that the legacies of the French presence in Algeria still demand consideration. It is also a demonstration that Daoud is in equal measure a thoughtful and provocative writer.’ Times Literary Supplement

‘[A] scorching debut novel that is sure to become an essential companion to Camus’s masterpiece...a biting, profound response to French colonialism. It is also a lamentation for a modern Algeria gripped by pious fundamentalism...The pages glitter with memorable phrases. This brave book is a vertiginous response to a century of trauma.’ The Economist

‘Extraordinary…Like Vendredi, Michel Tournier’s subaltern rewrite of Robinson Crusoe, The Meursault Investigation wrests the narrative away from the settler.’ London Review of Books

‘A tour de force…Daoud has performed a great service for his country: he has taken a western classic and used it to illuminate the Algerian mind.’ Sunday Times

‘[A] stunning debut novel…an intricately layered tale that not only makes us reassess Camus’s novel but also nudges us into a contemplation of Algeria’s history and current religious politics; colonialism and postcolonialism; and the ways in which language and perspective can radically alter a seemingly simple story and the social and philosophical shadows it casts backward and forward.’ Michiko Kakutani, New York Times

‘[A] remarkable debut novel…has the magnetism of its forebear, but its themes of voicelessness and vengeance feel utterly present-day. Vogue

‘Nothing…prepared me for [Daoud’s] first novel, a thrilling retelling of Albert Camus’s 1942 classic …The Meursault Investigation is less a critique of The Outsider than its postcolonial sequel.’ New York Times Magazine

‘Sensuous, comical and passionate…For its incandescence, its precision of phrase and description, and its cross-cultural significance, The Meursault Investigation is an instant classic.’ Guardian

‘[A] rich and inventive new novel...so convincing and so satisfying that we no longer think of the original story as the truth, but rather come to question it...[a] letter of love, rebellion and despair for Algeria.’ New York Times Book Review

‘Give Kamel Daoud credit for audacity…The true measure of the novel…is that Daoud realizes critique is not enough…the power - and, yes, the beauty - of The Meursault Investigation is that it moves…to an unexpected integration in which we recognize that for all the intractable divides of faith or nationality, our humanity remains (how can it not?) essentially the same.’ Los Angeles Times

‘A brilliantly executed slap in the face to a literary-academic establishment that treats writers as celebrities and celebrates literature as “challenging” to avoid being challenged by it. (So now let’s all do the only reasonable thing and celebrate The Meursault Investigation.)’ The Paris Review

‘Daoud’s book confounds the facts and critiques those who insist on them too earnestly, in order to encourage us to see the extent to which all facts are somehow “in someone’s head”.’ Los Angeles Review of Books

‘[A] mesmerizing first novel...The Meursault Investigation has an inescapable topical resonance, given the role played by political Islam in Algeria in recent times...an absorbing, independent story and a shrewd critique of a country trapped in history’s time warp.’ Wall Street Journal

‘In Kamel Daoud’s The Meursault Investigation, a tour-de-force reimagining of Camus’s The Outsider, from the point of view of the mute Arab victims, the author seeks not to re-indict the colonizing French but to relate all the disappointments that the dream of free Algeria has produced for the ‘natives,’ particularly their degradation by political Islam.’ The New Yorker

‘[Daoud] has written a counter inquiry to The Outsider. In the same incisive style…Daoud’s book suggests that the real stranger…is not Meursault, but the dead man on the beach…like a priest who practices his faith after the death of God, Daoud esteems Camus…he accepts the Sisyphean task of tussling with a writer who has fallen into an anonymity in Algeria almost as deep as the dead Arab’s…Daoud deserves a better fate: honor in his own country and a wide readership in a world still grappling with the ethical dilemmas that he so passionately portrays.’ Washington Post

‘If L’Étranger is the story of an everyman who murders a nameless Arab on a beach only to be found guilty for the moral defect of failing to cry at his mother’s funeral, [The Meursault Investigation] is the audacious kick-in-the-groin response…simultaneously a rebuttal and a loving embrace.’ Toronto Star

‘[A] blazing, brilliantly conceived debut novel…An eye-opening, humbling read, splendid whether or not you know and love the original.’ Library Journal

‘Humor erupts in [the book] every time there is tragedy, and this recipe for the Algerian absurd gives Daoud’s book its literary sting.’ The Nation

‘Some ideas are so clever it's a wonder no one has thought of them before. Case in point: Algerian writer Kamel Daoud's The Meursault Investigation…Daoud's novel adds provocative new dimensions to the discussion.’ NPR.org

‘Daoud’s work is not simply a riff on the French canon, but rather a vast and searching allegory of the conquest of a people…It is a fool’s task to try to quote this novel, which must be read as one ecstatic whole.’ TheNewYorker.com

‘It’s the rare writer who can pick up where Albert Camus - master of mid-century philosophy and fiction - left off in the modern classic, The Outsider (formerly translated as The Outsider). But Kamel Daoud, an Algerian journalist and writer, has done just that in his new novel, The Meursault Investigation.… Daoud’s book renews L’Étranger as an Algerian story for everyone, an incandescent read.’ WBUR / Radio Open Source

‘Fiercely political…Mr. Daoud’s writing is like a live wire flowing with anger. It sparks fresh insights, raises important questions about the links between literature and politics, and challenges us to view the literary past and political present in new ways.’  Pittsburgh Post Gazette

‘The nameless Arab victim of Albert Camus’s The Outsider receives a biography and a name in this thoughtful, controversial rejoinder…Fiction with a strong moral edge, a Rashomon-like response to a classic novel.’ Kirkus

‘Camus’s The Outsider is vividly reimagined in Daoud’s intensely atmospheric novel…Daoud resists affirming which interpretation [of the story] is “truer”, and readers will be captivated by the ambiguity.’ Publishers Weekly

‘Quirky - and compelling - [The Meursault Investigation] is a meditation by turns passionate, cynical, and angry on power, freedom, and the indifference of the universe.’ Philadelphia Inquirer

‘Daoud shows the same chutzpah as Virgil did in the Aeneid. Just as the Roman poet bowed to Homer’s greatness, all the while trying to outdo him, Daoud borrows from Camus and makes the material his very own…Such a task calls for a language as spare and sharp as the mountains and deserts of Algeria…Kamel Daoud has written a haunting novel of great beauty and moral insight.’ Jewish Daily Forward

‘Daoud’s premise is inspired, his prose gutsy and thrilling, and like The Outsider [his novel] deserves to be devoured and savoured at a single sitting…it reads like a worthy companion piece to The Outsider, a story with the same depth and intensity.’ The National

‘Daoud brings absurdist sentiments to postcolonial Algeria…[he] reconsiders a massive literary tradition…Daoud goes back in time to aim his (slightly more impassioned) absurdist lens at the non-character of the “Arab” who died and the place that bore witness to the death in one of Absurdism’s seminal, fictional moments.’ Flavorwire
‘[An] excellent debut novel…[its] force derives from the pathos of watching a powerful, insightful, witty mind recount a life that has mostly gone unlived, thwarted by early trauma.’ Barnes & Noble Review
‘A complex and clever piece of storytelling…Daoud’s novel has had something of the same rousing effect as Camus’s…Harun’s final act is certainly provocative, heretical even. It echoes The Outsider’s own denouement, in which Meursault denounces God as a waste of time, and life as meaningless. But even more than that, Daoud’s narrator, while recounting his story, is also recounting that of his homeland, one that has taken a few bullets of its own in the last half century.’ The Millions

‘In The Meursault Investigation, Kamel Daoud takes us to a territory that is clearly his own. I loved the unexpected depth to the restorative nature of the text, which enthralls the readers all the more, especially when they are familiar with Albert Camus’s The Outsider.  It is a wonderful novel.’ Nuruddin Farah, award-winning author of Hiding in Plain Sight

‘A superb novel…In the future, The Outsider and The Meursault Investigation will be read side by side.’ Le Monde

‘Of all the many tributes paid Camus…this may be the most intimate, heartfelt, and enlightening.’ Words Without Borders

‘Kamel Daoud, well known in Algeria for his political columns that criticize the government, has turned to literature to describe the complex heritage of the past in present-day Algeria.’ World Literature Today

‘This tour de force forever changes the way you see Camus’ novel…Daoud's book stands Camus on his head…What makes Daoud's book so good is that, steeped in independent thinking, it offers an illuminating, if controversial, portrait of today's Algeria.’ NPR’s Fresh Air

‘A worthy complement to its great predecessor, The Meursault Investigation is not only a profound meditation on Arab identity and the disastrous effects of colonialism in Algeria, but also a stunning work of literature in its own right, told in a unique and affecting vice.’ FrenchCulture.org

‘A remarkable homage to its model.’ Le Nouvel Observateur


Kamel Daoud is an Algerian journalist based in Oran, where he writes for the Quotidien d’Oran – the third largest French-language Algerian newspaper. He contributes a weekly column to Le Point, and his articles have appeared in Libération, Le Monde, Courrier International, and are regularly reprinted around the world. International rights to the novel have been sold in twenty countries.

John Cullen is the translator of many books from Spanish, French, German, and Italian, including Philippe Claudel's Brodeck, Juli Zeh's Decompression, Yasmina Reza's Happy Are the Happy, and Chantal Thomas's The Exchange of Princesses. He lives in New York.